Is the action you take today getting you closer to where you want to be tomorrow?

Once you put SYM at the hub of your professional relationships, you’ll see how streamlined business ownership can become. Let SYM captain your team of CPAs, attorneys, and other professionals to work toward your best interest.

You can say that again

Every day we’re here to serve you with our best. No exceptions, just a fiduciary commitment 24/7.

Whether your product is parts or poultry, rely on your advisor to tend to financial strategies that support your growth.

It takes one to know one

Looking out for your tomorrow

Tell us what you want your retirement to look like and we’ll work to get you there. “How do I provide for my own retirement?”

“When you do the common things in life in an uncommon way, you will command the attention of the world.” – George Washington Carver

Robert, a SYM client of many years, worked as a self-employed consultant in the manufacturing industry. Success, however, brought unexpected challenges. Robert had been effective and well-respected in his prior, corporate job and was responsible with his income, taking care of priorities first like the children’s education and helping family members.

He knew a career change meant he was risking his retirement by moving to independent consulting and would need to bear the brunt of retirement savings himself. He also knew that making $6000 annual contributions to an IRA wasn’t going to get him to a comfortable retirement, but he wasn’t sure what would. Robert’s problem, however, wasn’t a lack of income to direct to retirement – it was a success problem.

Read moreless
He succeeded in leaving his corporate job early; he succeeded in establishing a profitable business. The sticking point was that Robert was so successful in his new endeavor, he was generating a lot of income but paying tax on that income at a very steep rate.

In response, Robert’s SYM advisor helped him to set up a defined benefit plan, which allowed him to make significant retirement plan contributions over and above what he would have been able to do using a 401(k) plan. This plan helped to defer a good part of his taxable income, postponed until after retirement. All in all, SYM helped Robert to defer taxes on more than $1 million income over a period of several years.

Good business owner financial planning helps people live how they want to live. Robert did the work to be successful in his business, and SYM captured the benefits of that success for the longer term. Robert knew he had a service that people were willing to pay for. His priorities were to provide for his spouse, children and grandchildren and create something for their future. SYM helped him to do just that.

Disclosure: The above scenario is for illustrative purposes only and is not intended to depict an actual client or circumstances. This material is not financial advice, an offer to sell, or a solicitation of an offer to purchase any security managed by SYM Financial Corporation (“SYM”). The opinions and assumptions expressed herein are those of SYM Financial Corporation (“SYM”) and are subject to change without notice. SYM is an independent investment adviser registered under the Investment Advisers Act of 1940, as amended. Registration does not imply a certain level of skill or training. More information about SYM including our investment strategies, fees, and objectives can be found in our ADV Part 2, which is available upon request. 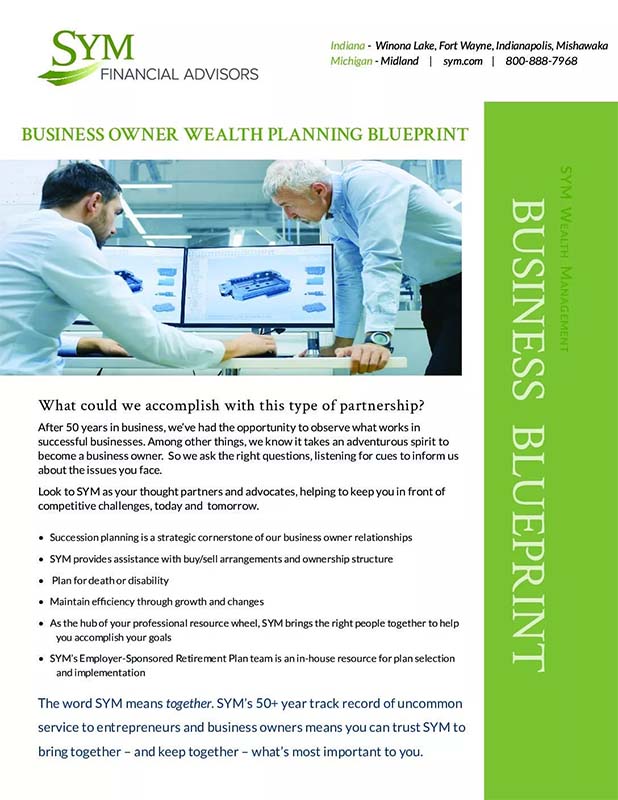